What's the difference between mono and strep throat? 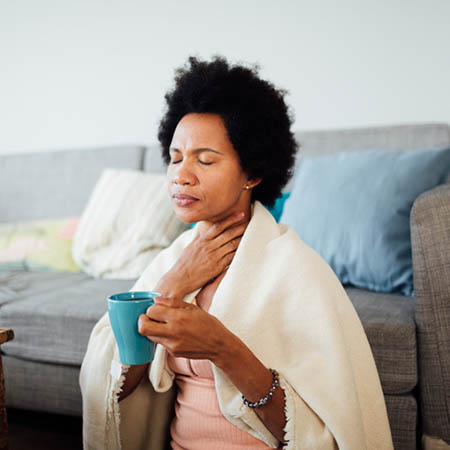 When you wake up with a scratchy throat, your first thought is probably the common cold. But when that sore throat persists, you may start to wonder if it’s something more like strep throat. What likely doesn’t pop into your head is the idea that it may be mononucleosis, commonly shortened to mono.

Because it’s typically referred to as the “kissing disease,” mono is often dismissed as a reason for symptoms. However, this contagious viral infection can be transmitted in many different ways—in fact, as many as 90 to 95 percent of adults are infected with the virus that causes mono.

It’s important that you’re able to identify the symptoms of both strep throat and mono so that you can get treated accordingly. Here’s a look at the difference between both illnesses and the steps you should take to treat each.

Causes of both mono and strep throat

While the symptoms of mono and strep throat are very similar, the causes are completely different. Here’s the difference between the two.

Mono is a viral infection most commonly caused by the Epstein-Barr virus (EBV). It’s important to note that not everyone who gets EBV will develop mono. Mono is most common in teens and young adults, and at least 25% of young people who contract EBV will go on to suffer from mono.

What are the symptoms of mono?

Mono impacts all ages, including young children, but it’s most common in teenagers and college-aged adults. As you get older, the symptoms of mono tend to get more severe.

Because the symptoms of mono are so similar to those of the cold and flu, most people are quick to incorrectly diagnose themselves.

Those suffering from mono usually experience the following symptoms:

Typically, symptoms of mono last two to four weeks; however, about 10% of those with the infection have noted persistent fatigue past six months (UTD).

What are the symptoms of strep throat?

Symptoms of strep throat are very similar to those of mono and can include:

It’s possible for those affected by strep throat to experience symptoms that impact the GI system like belly pain and nausea. It’s unlikely that a cough or runny nose accompanies strep throat as those are more often associated with a viral illness.

What are the differences between mono and strep throat?

While many of the physical symptoms of strep throat and mono are the same, there are some key differentiators. For instance, when you have strep throat, you will notice white patches on your tonsils. You may also discover red spots on the roof of your mouth.

With mono, spleen enlargement is a common side effect, so you may feel pressure or pain in the upper left area of your abdomen. If this happens, you should seek medical attention immediately.

Are mono and strep throat diagnosed the same way?

If you’re suffering from strep throat symptoms, a doctor can properly diagnose you by performing a rapid strep test or throat culture.

During a rapid strep test, your doctor will swab your throat using a long q-tip and then run a test on the swab. If group A strep appears during the test, you will likely be prescribed an antibiotic. In some cases, the test can come back negative, but your doctor may recommend a throat culture if he or she suspects strep throat.

Mono, on the other hand, must be diagnosed through a blood test. This will check for the antibodies that your body makes to fight EBV. Your doctor may also want to test for a high number of white blood cells as this could be an indication of infection.

How do you treat strep throat?

Strep throat is typically treated with antibiotics. Most doctors will prescribe either penicillin or amoxicillin (as long as you aren’t allergic). Antibiotics will help:

If you test positive for strep throat but aren’t exhibiting symptoms (this is called a “carrier”), you may not need antibiotics since you’re less likely to spread the bacteria to others. If you think you or your child may be a strep carrier, it’s a good idea to talk with your doctor.

How do you treat mono?

Unfortunately, there isn’t a cure for mono. Antibiotics that are typically prescribed to fight bacterial infections have no effect on the virus. Your doctor will most likely recommend you take the following measures to help relieve symptoms and start feeling better:

If you’re showing signs of either strep throat or mono, it’s important that you see a doctor quickly to begin treatment or relieving symptoms.

At CareNow®, our qualified medical staff is ready to care for you when and where you need it most. We’re open 7 days a week, available after hours, to get you the care you deserve.

Before your visit, be sure to use our Web Check-In® feature. This will allow you to wait from the comfort of your home instead of sitting in a waiting room.

How to Break a Fever

January 9, 2021
If you have a fever, it’s important that you know how to handle it yourself and when it’s severe enough to seek medical attention. We’re sharing...
Previous Post

When Should You Go to Urgent Care for A Muscle...

November 20, 2020
Here’s when you should go to urgent care for a muscle strain.
Next Post
Back to blog home

How To Make and Keep New Year's Resolutions

How to avoid weight gain in the winter

Supplies to include in your first aid kit