How much sodium should you have per day? 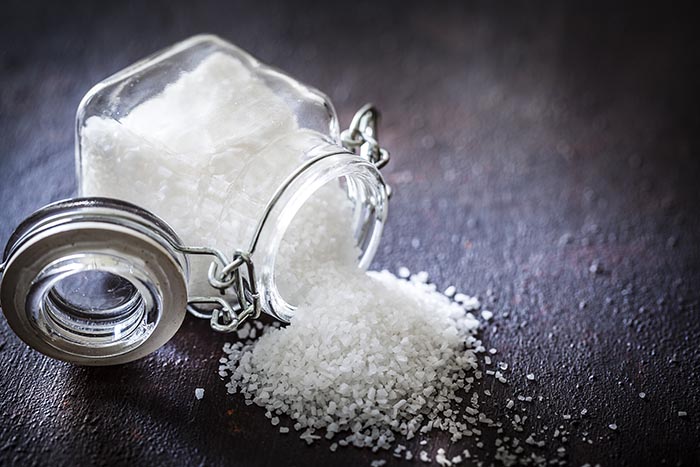 Most Americans are eating too much sodium on a regular basis.

While some sodium is needed for the body to function properly, eating too much can cause myriad health problems. In fact, diets higher in sodium are linked to an increased risk of developing high blood pressure.

Most dietary sodium tends to come from packaged and prepared foods—not from salt that’s added to food during the cooking or preparation process.

How much sodium per day?

The daily recommended value for sodium is less than 2,300 milligrams each day. Also simply referred to as salt, this mineral plays a crucial role in maintaining our health, essential for nerve and muscle function and the regulation of fluids in the body.

The problem occurs when people consume too much, often unwittingly. Commonly used in food manufacturing, processed foods account for an estimated 75 percent of total sodium consumed.

The best way to monitor your intake of sodium is to read food labels, paying particular attention to the servings per container and % Daily Value (also labeled %DV). These numbers will let you know the percentage of your daily sodium intake in the packaged food that you’re eating.

Side effects of too much sodium

If you take in too much sodium during the day, it can have a direct effect on your blood pressure.

It’s no secret that sodium increases blood pressure, especially in those who have elevated levels.

An extensive study published in 2014 analyzed the urine sodium levels of more than 100,000 people from 18 different countries across five continents. Researchers found that:

But not everyone responds to sodium in the same way. People with high blood pressure, diabetes and chronic kidney disease, as well as older adults and African-Americans, tend to be more sensitive to the blood pressure–raising effects of sodium.

How much sodium per day should you consume if diagnosed with high blood pressure?

If you’ve been diagnosed with high blood pressure, it’s important that you take in less than 1,500 milligrams of sodium a day. This requires some careful monitoring, including reading food labels and making mindful choices at restaurants. Here are a few tips when eating out:

How to lower sodium intake

In addition to reading the nutrition facts on labels and making careful choices at restaurants, prepare more meals yourself—and limit the salt in recipes—as much as possible. Include fresh meat, fruits and vegetables, and always rinse canned foods that contain sodium.

For enhanced flavor, add spices like black pepper, nutmeg, cilantro, thyme and onion powder instead of salt. A smaller portion size can also help you take in less sodium.

Eating a low-sodium diet doesn’t need to be one of deprivation!

Another way to cut back on the amount of sodium you eat is by reducing your calorie intake. More calories often means more sodium.

Foods that can lower blood pressure

If your blood pressure is high, a diet low in sodium and rich in foods that contain potassium, calcium and magnesium can help normalize your numbers. So what would that look like for your daily diet?

To see a full list of foods that can help lower your blood pressure.

Just because you’ve been directed to reduce the amount of salt in your diet, doesn’t mean you have to eat bland food. Spices, herbs and other salt alternatives are flavorful options for salt.

Providers commonly recommend low-salt diets for those with high blood pressure, which leads to the question, Is there such thing as a no-salt diet?

While it’s almost impossible to completely cut salt out of your diet, there are foods that you can consume that contain very little or no salt.

Here are more options for a very low-sodium diet.

What causes low sodium and is it dangerous?

When the sodium in your blood is abnormally low, it is called hyponatremia.

With hyponatremia, the sodium in your body becomes diluted. As the water levels increase, the cells start to swell, resulting in a number of health problems.

Causes range from something simple, such as drinking too much water, to life-threatening, like heart, kidney, liver or hormonal problems.

If you’re suffering from hyponatremia, you may experience one or more of the following symptoms:

Because the symptoms of hyponatremia can happen with many conditions, it can be difficult to diagnose. Blood and urine tests are usually required.

Treatment for hyponatremia is usually aimed at addressing the underlying cause of the condition.

If you have high blood pressure or are exhibiting symptoms of high sodium levels, your provider will likely run a sodium blood test to measure how much is in your blood.

If you’re looking for ways to lower your sodium intake, consider visiting your local CareNow® to speak with a medical professional or to get a sodium blood test.

Before your visit, be sure to use our Web Check-In® feature.

Find the CareNow® clinic closest to you by visiting our website.

Is coffee bad for you?

May 26, 2019
With coffee shops popping up on every corner, it’s no surprise that coffee has become one of the most popular drinks around.
Previous Post

Why am I so tired?

April 26, 2019
If you have been feeling tired during the day or have difficulty falling or staying asleep at night, you may be struggling with insomnia.
Next Post
Back to blog home

What to do if you have ringworm

Sinus infection or allergies? How to tell the difference

How to avoid psoriasis flare-ups

How To Treat Sunburns