Some clinics are seeing longer than usual wait times. Check in online so you can wait from home.

10 Unhealthy Candies to Toss from Your Halloween Haul 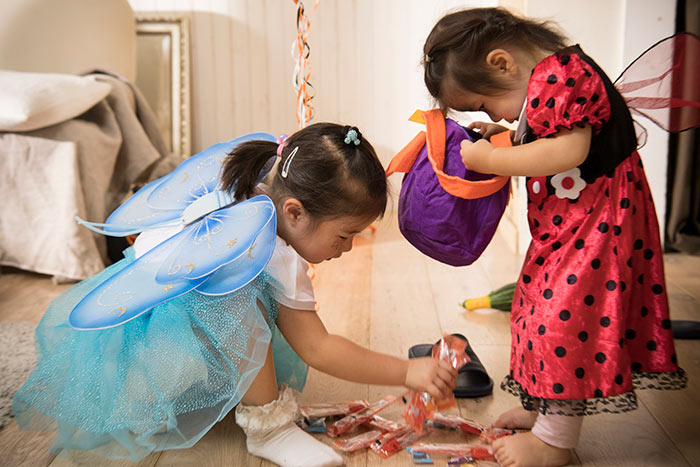 Every Halloween, children spend hours walking house to house around their neighborhood in costume collecting candy. This tradition, which is known as trick-or-treating, has been going on for nearly a century and has evolved into a worldwide event.

Here is a look at some of the unhealthiest candies your child may take home this Halloween and some healthier options too.

Even by candy-bar standards, M&Ms are known for containing a lot of sugar. In fact, one fun-size bag of these colorful chocolate candies is packed with more sugar than a Little Debbie Chocolate Marshmallow Pie. On top of the crazy sugar content, M&Ms are also made with food dyes, which you may want your child to avoid eating.

Most fruity candies made in the U.S. contain the same ingredients: sugar, vegetable oil and artificial colors. Now and Later candies are no exception. Because these chewy candies are considered taffy, they are one of the worst foods for your teeth and are best tossed from the Halloween stash.

With no redeeming quality, a Jolly Rancher is one of the unhealthiest candies your child can collect on Halloween. These small, hard candies are made from only corn syrup and sugar (with a small amount of malic acid for that tangy taste).

Milky Way is made with the usual suspects—sugar, corn syrup, vegetable oil and artificial flavors. Unlike other popular candies that contain fillers, like wafers, nuts, rice or pretzels, Milky Way is one of the most sugar-laden candies around.

Almond Joy (and its sister candy, Almond Mounds) includes a common combination of corn syrup, milk chocolate, sugar, vegetable oils and nuts. These two candies, however, also use coconut, which increases the amount of fat in them.

The Werther’s Original Chewy Caramels are made using glucose syrup, sugar and milk, so there is very little redeeming value.

Although one of these chewy candies is not the worst thing your child can have, most people go through handfuls at a time, which can add up. A healthier alternative is Werther’s Original Hard Candy.

Many people opt for Dove chocolate because they’re marketed as a healthier alternative to other candies. But beware—this silky, smooth candy is actually one of the fattiest your child can have.

What many people don’t know is that Dove chocolates are made by Mars—the company that also makes M&Ms and Snickers.

Perhaps one of the most popular candies year-round is the Reese’s Peanut Butter Cup. During Halloween, Reese’s releases a seasonal candy shaped like a pumpkin—but it’s not nearly as healthy as the cup.

One peanut butter pumpkin has 85 calories, 5 grams of fat and 8.5 grams of sugar—and we guarantee nobody is eating just one!

Swedish Fish, with “a fat free food” marked right on the label, may seem like a great choice with only contain 55 calories a bag, but they pack a whopping 11.5 grams of sugar and are made with at least two different types of sweetener.

On top of that, this chewy candy is formulated with carnauba wax, which is also used to polish cars.

Although it may be the most festive candy of the season, candy corn is also one of the worst for your child.

Candy corn boasts that it’s made with “real honey”; however, the real honey is listed alongside several other not-so-healthy ingredients like sugar, gelatin (which is made from the hooves of horses), sesame oil and artificial flavors and colors.

Healthy Candies for Your Child This Halloween

When your kids come home with giant stashes of Halloween candy, you may want to pick out some of the worst and leave them with the better options.

Since all candy is made with sugar and oils, no candy is necessarily good for you, but there are some options that have less of the bad stuff than others. So what does that include?

Because the wafer core is so light, it keeps the number of calories in these snack-size treats minimal, making them a great option for a Halloween treat.

Compared to Junior Mints, these peppermint patties are a third the calories, which can add up when you eat more than one!

Because the milk chocolate core of these M&Ms has been replaced with pretzel, these candies have much less sugar than their original counterpart.

Although these light and airy chocolate bars contain quite a bit of sugar, they don’t have a caramel filling, which saves them from even more sugar and calories.

Crisped rice makes these fun-size treats one of the healthier options for Halloween. But the rice is made with sugar, so they should still be eaten sparingly.

Despite a fairly high fat count, three of these foiled nuggets can give you the satisfaction of a sweet chocolate treat with the nutritional cost of a single Snickers.

For one snack-size Mr. Goodbar, your child will only be consuming 44 calories and 3.8 grams of sugar. Compared to some of the other popular candies containing milk chocolate and peanuts, these small treats are a healthier choice.

If you’re planning to hand out goodies to trick-or-treaters but want to stay away from sugary candy, consider something like popcorn, pretzels or trail mix. If you want to opt for something that isn’t food, you could hand out stickers, bubbles, glow sticks or stamps.

For more helpful posts like this, be sure to check back on the CareNow® blog regularly.

5 Ways That Taking a Break from Technology Can...

November 6, 2019
By taking a break from technology, you can reap significant benefits, both mentally and physically.
Previous Post

How to Make Sure Your Kids Have a Fun, Safe and...

October 24, 2019
While Halloween can be one of the most exciting nights of the year for children, it can also come with its fair share of hazards.
Next Post
Back to blog home

How To Treat Sunburns

Boosting Your Immune System During the Coronavirus Outbreak

How to Get Rid of Scars

When to Use Virtual Visits at CareNow Urgent Care